Apple TV vs. Chromecast: Which should I get? 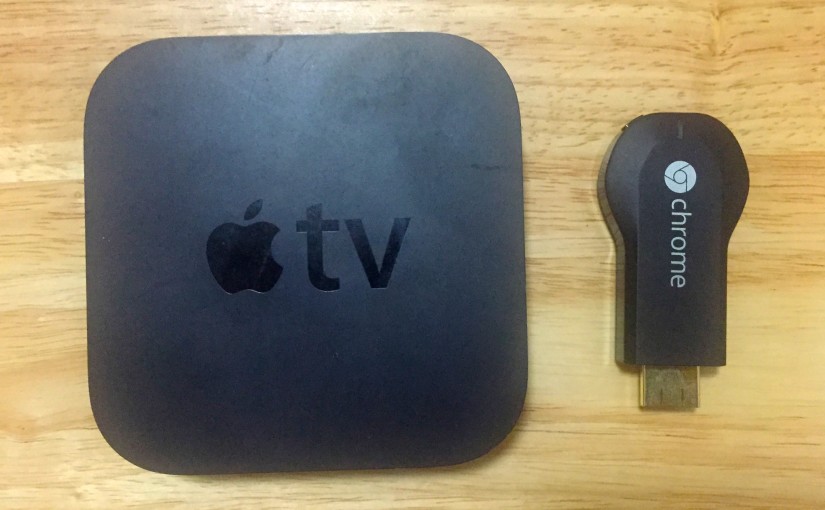 Portability and Size
Both devices are small in size and have great portability. The Chromecast has a bit of an edge over the Apple TV because it looks like a USB dongle. The Apple TV is a very small box similar to something like an external hard drive. Even though the Chromecast is much smaller, it still requires both HDMI connectivity and a power source just like the Apple TV. Google includes both a wall adaptor and a USB power adaptor which gives you the option to choose how you want to power your Chromecast.

In terms of portability, I think the Google Chromecast wins just because it is way smaller. I recently took a trip with my family and decided to bring the Chromecast instead of the Apple TV and it worked great. The Chromecast also creates its own Wi-Fi connection that you can connect to for setup. After setting up, you’ll need a router to connect all your devices to Chromecast, much like the Apple TV.

Versatility and Media Playback
The Apple TV has Airplay while the Google Chromecast has Casting. Both work great but I really feel like Airplay has the better experience. Most high-end Android devices already support screen casting but the list is pretty short compared to how many actual Android devices there are are out there.

One great thing about the Apple TV is you won’t need a device to use it at all. It works standalone as a media player with the iTunes Store and with built-in apps like Youtube and Vimeo. The Chromecast is exactly that: a casting device. You will need a device whether a mobile phone or a computer to use it. However, the great thing about the Chromecast is that you can use it with iOS, Android, Mac (Google Chrome) and PCs (Google Chrome). It would really be up to you based on your usage and the kinds of devices you have.

Pro Tip: Drag a video or audio file into your Chrome browser while casting and you can easily watch and listen to video and music from your Mac or PC.

Youtube
I watch A LOT of Youtube on both the Apple TV and the Google Chromecast. Both work great with Youtube and are enjoyable to use. With the Apple TV, I prefer using Airplay because it’s faster to get around Youtube than with the built-in Apple TV app. For Google Chromecast and the Youtube app, you will be able to take advantage of the best feature ever: TV Queue. The Chromecast is my FAVORITE way of watching Youtube now because of the queue.

What you are able to do is add videos to the TV queue straight from the Youtube app (Both iOS and Android! Also with a Mac/PC with Google Chrome!). Not only that, everyone in your network can join in. Everyone in your family or group can add videos to the queue at any point and the Chromecast will just continue playing. We once used this to watch movie trailers for 2 hours straight — no kidding. You just can’t do this with the Apple TV. You’d have to keep selecting a new video one after the other. With the Google Chromecast, you select a couple videos, sit back, and relax.

Price
At the time I bought the Apple TV, it retailed for $99 (₱4,990) but recently Apple has made the device cheaper at just $69 (₱3,790). The Google Chromecast currently retails for only $35 but there are no official retailers here in the Philippines. I was lucky enough to find one for ₱1,500 from a friend who was selling it and had bought it from the Google Play Store. I have also seen online Philippine stores sell the device for as low as ₱2,200 to as high as ₱3,000.

Both devices are definitely worth their price and I don’t think they’re too far apart to be a huge factor. If you’re really on a tight budget, the Google Chromecast is the way to go.

So should I buy the Apple TV or the Google Chromecast?
There are a few things to consider and here are some questions you can ask yourself:

Are you on a tight budget? If yes, get the Google Chromecast.

Do you mostly have iOS or Mac devices? If yes, get the Apple TV.

Do you mostly have Android or Windows devices? If yes, get the Google Chromecast.

But really, I don’t think I could change my current setup. I love them both and they each have their own great features. I work with both iOS and Android, Mac and PC so having both is a great thing. Considering that they are not expensive, and if you can afford both, I highly recommend getting both the Apple TV and Google Chromecast. Right now, I have my Apple TV set up in my bedroom which is hooked up to a projector while the Google Chromecast is plugged to the living room TV. Because of it’s portability, I am able to easily transfer the Google Chromecast to the bedroom when I need it.

Bonus: There are a lot of Airplay and Chromecast games out there. I don’t think they’re very big yet and some are still clunky and slow. Airplay games seem to perform better but Chromecast games are more cross platform and allow multiplayer games between iOS and Android devices.